YouTube has for the longest time defined and influenced our day-to-day life along with other social media platforms such as Facebook, Instagram, and Tiktok. News breaks here, trends are set here, money is made here; they are the go-to platforms.

YouTube alone has contributed to the success of several people like Justin Bieber, PewDiePie, Jeffree Star, and many others. Notably, it has made an 8-year old boy a millionaire – Ryan Kaji – who continues to sit on the top of highest-paid YouTubers by taking home a whopping $26 million in 2019 alone; and just how did this kid’s success start? By unwrapping toys and reviewing them.

Now, why are you reading about YouTube? Simple, it is essentially a knowledge hub, of course, for those who know how to use it.

Given that YouTube is one of the go-to hubs, there is also no way scammers would miss out on orchestrating a ‘Giveaway’ scam, and this scam has been spreading like wildfire since the end of last year. The scheme deployed is rather a no-sweat game: create a channel resembling the official community name, replay an old conference or interview video of a crypto-influencer, have a giveaway highlight at the end of the video redirecting users to check the description, post the giveaway details, and now, the important piece of the puzzle is to make sure that the entire scam is live.

After posting this, it’s all about for the prey to take the bait.

Now, considering how YouTube recommends videos based on past search history, it was only natural that these giveaway scams made it to my colleagues and my recommended list; if you are someone that does a lot of crypto-related search on YouTube, then you too would have stumbled upon at least one of these kinds of videos in the first three rows.

To see how efficient these scams are, we analyzed a few of these ‘Live Giveaway Scams’ over six days. In these six days, Ethereum, Bitcoin, and Binance took the front seat, while McAfee, Coinbase, Litecoin and Bitcoin Cash took the back seat. Taking 27 addresses into consideration for six days, the scammers made a $330,959.30.

Giveaway scams are no new tale in the cryptosphere. On Twitter, Fake accounts are created under the names of Vitalik Buterin, Changpeng Zhao and ensuring that it resembles closely to that of the original account.

The strategy employed on Twitter was also just as easy; immediately respond to the original Tweet with a giveaway promo, have multiple fake accounts reply to the giveaway message with messages that go along the lines of “Thanks! Received.” This saw even Pope Francis and Elon Musk became the target of scammers on Twitter.

A network of bot accounts promoting scam ICOs and fake crypto giveaways continued to target public figures both within and outside the crypto world. Elon Musk – the face of Tesla and SpaceX – had stated:

“I want to know who is running the Etherium scambots! Mad skillz …”

While Ethereum was at the apex of Twitter scams, it has also taken the top spot in the YouTube giveaway scams as well. A total of $64,038.38 worth of Ethereum was siphoned via YouTube scams, all of them featuring the ‘Great Dictator’ Vitalik Buterin.

The conditions to participate in these scam games were quite interesting. Send +3 ETH, get 30 ETH back; send 10+ ETH, get 100 ETH back with 10 percent bonus, and as the amount sent increases, the amount promised to send back also increases. 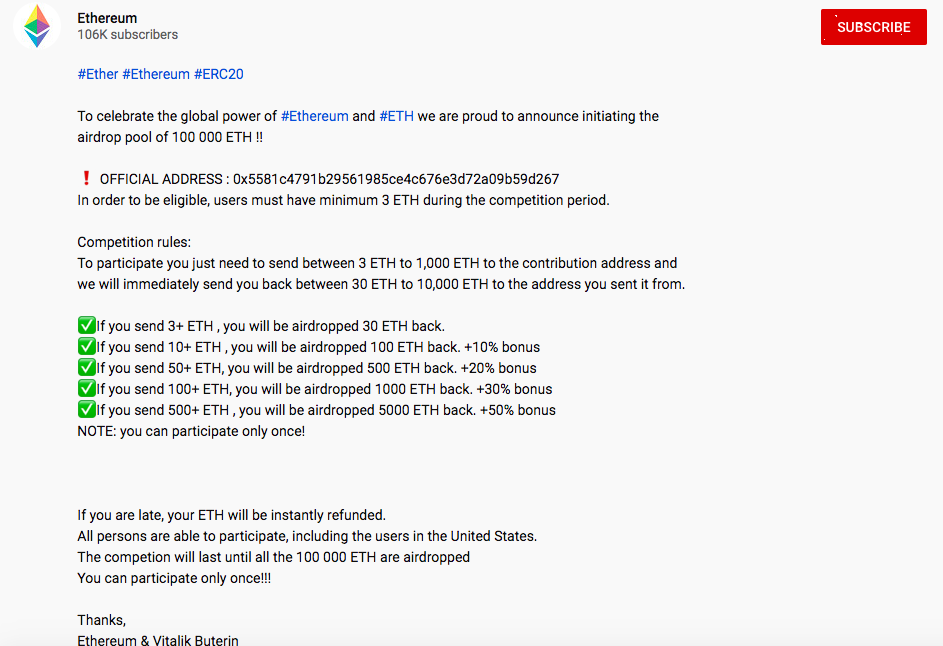 Binance’s “Changpeng Zhao’s YT videos” took the crown in terms of the amount scammed by users within a week’s time. With Buterin promising Ethereum back, Zhao was spotted promising to giveaway Bitcoin back on the video-sharing platform. Under Zhao’s name, scammers have managed to take home over $225K worth of Bitcoin, with these videos recording more viewers compared to others.

The conditions to participate in this giveaway are quite similar to that of the Ethereum giveaway scam on YouTube. 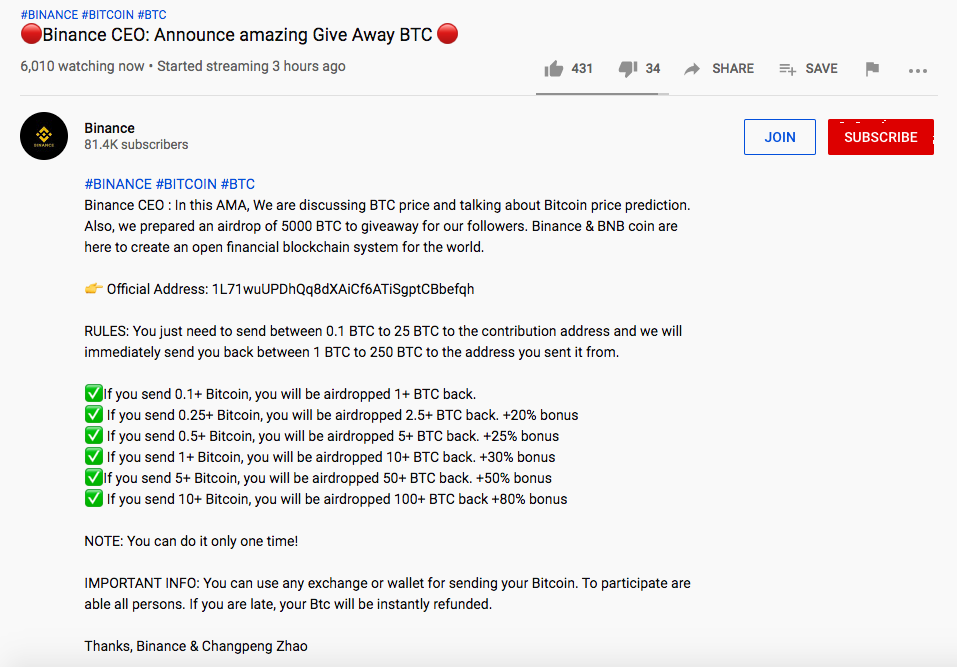 Now, a crypto-giveaway without Elon Musk would indeed make the scam game a dull game; so, the scammers ensured that there would a scam in the name of Musk even on YouTube. However, this time around, they opted for Bitcoin instead of Ethereum and managed to earn $2909.35. 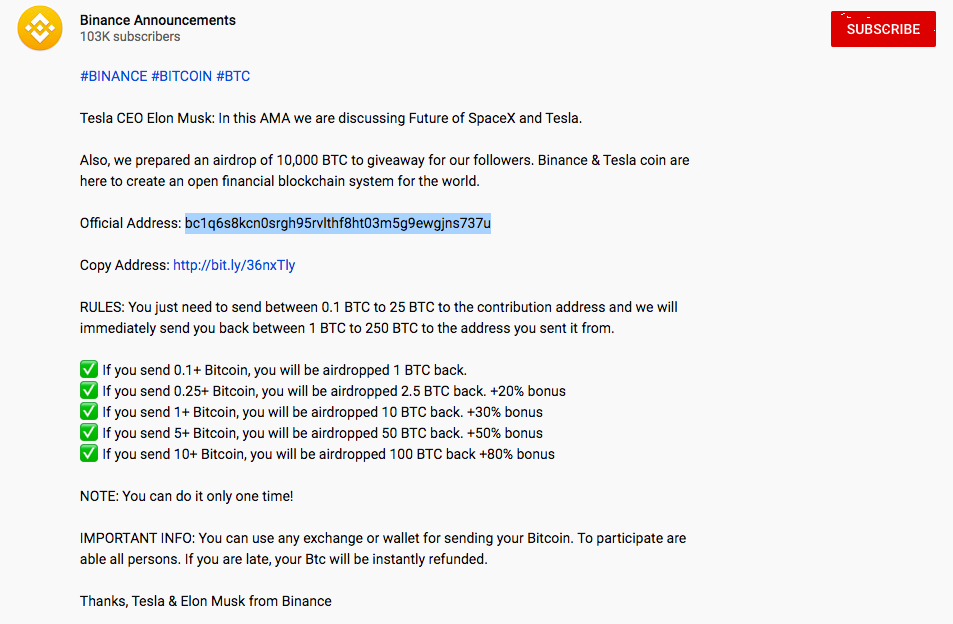 With Binance and Ethereum taking the top two positions, the other scams that followed were Litecoin, Ripple, Bitcoin Cash, and more Bitcoin scams in the name of other influencers, which amounted to a total of over $40k.

On whether this scam-game had an impact on the YouTube‘s move to take down crypto-videos, Bob Summerwill – ETC Cooperative Director – shared his thoughts with AMBCrypto,

“Yes, though not exclusively because of that. More generally, there is no quality bar for crypto videos and it is influencing people to put money at risk into projects many of which are scams. It is hard for YouTube to adequately ensure that there are not scams ongoing.”

On the impact, Summerwill stated,

“Not really, except for eliminating the scammiest elements. High-quality content will find other platforms. Having some barrier to entry is not a bad thing”

* The data on the amount the addresses received were calculated over a few days at the beginning of the year; since then there have been several more scams taking place on the social media platform.