DASH/USD: Is This Decline A Breather Or An Onset Of Bear Rally? 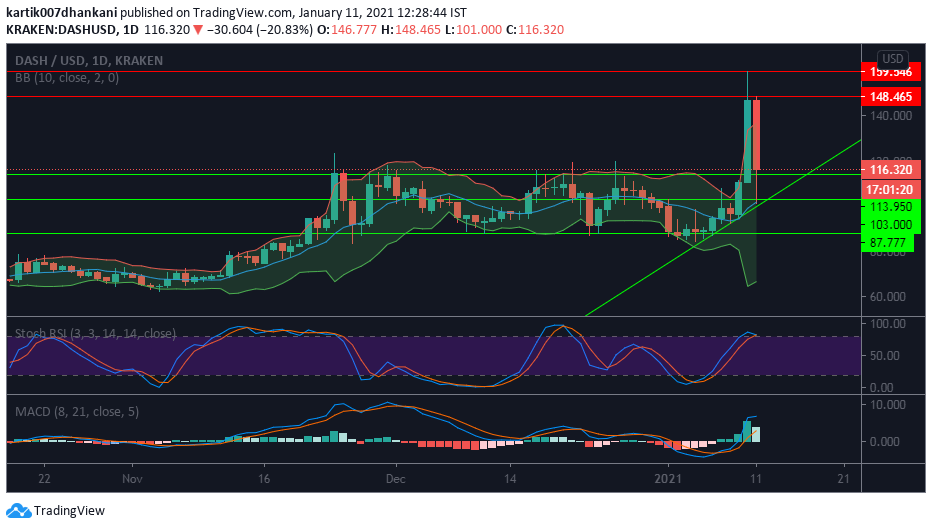 Dash coin gave breakout in last trading session i.e. January 10,2021 by giving an upside of 33% and making a green long candle with a long upper wick signalling an onset of the profit booking which continued to today’s trading session of January 11,2021. The coin declined 21% in today’s session by vanishing more than 80% of the bull rally but thus time the candle has a longer lower wick which is signalling fressh buying and confirmation of breakout. A further rally will find first resistance of $148.465 followed by $159-160.

The Bollinger Band got widened up and the lower band has contracted in today’s session which indicates lower volatility on the selling side as compared to the buying side. If the upper band continues to contract in upcoming sessions, it may resume this rally. The median of the Bollinger Band is acting as a strong support(at $100.3)

The Stochastic has given a selling signal, possibly restricting fresh buying. If the coin continues further the stochastic may stay in the overbought territory but if the lines decline below 80 levels then it should be considered as a selling signal only.

The MACD (8,21,5) is making divergence in the positive territory, this is a sign of weakness or potential; reversal. The signal lines have support at 3.85 levels.

The coin has so far respected the support of $114 which was once a strong resistance for the coin. If the coin sustains the level further or witnesses fresh buying, it is possibly continuing rallying upward to test the previous highs of $149 and $160.

Bitcoin Hits 16-Month High on Hopes March Toward $20K in Play By Investing.com

XRP looks vulnerable around the 200-SMA

Bittrex Won’t Disclose Why It Withdrew Support for...

6 Celebrities That Have Invested in Bitcoin and...

Bitcoin can scale on chain just fine as...