Litecoin’s (LTC) community has an alternative for making anonymous transactions while they wait for the MimbleWimble protocol deployment. Through the Incognito network, Litecoin users will be able to make secure and private transactions.

These funds are swap to pLTC at a 1:1 ratio and can be exchanged at any time, according to Ahmadi. When the swap from pLTC to LTC is made, the first tokens are burn to release the second ones to the user’s wallet. Ahmadi added:

By using your LTC on the Incognito network, you no longer have to worry about your privacy. No one can stalk you. No one can know your balance or what you spend it on. No oppressive government can surveil you or seize your funds.

Details on Litecoin’s integration with Incognito

Users will receive a temporary address when operating with Incognito. This address is created as part of the “shielding” process used by the Incognito platform to allow transactions with an asset. When an asset goes through this process, a “trusted bridge” is created that handles the custody and exchange of the funds.

In addition to the above, Ahmadi clarifies that a “trusted bridge” mints a “private version” of the cryptocurrency’s blockchain, in this case, Litecoin, and the “coin” in the Incognito network. To mint the blockchain, a multi-sig custodial wallet is created that stores the privacy coins (pLTC) and the “shielded” cryptocurrencies.

To prove that the funds contained in the wallet are stored at a 1:1 parity, a receipt proof is issued and sent to the user confirming that the new tokens were minted. In the image below it can be seen how the shielding process works in the Incognito network and its integration with Litecoin. 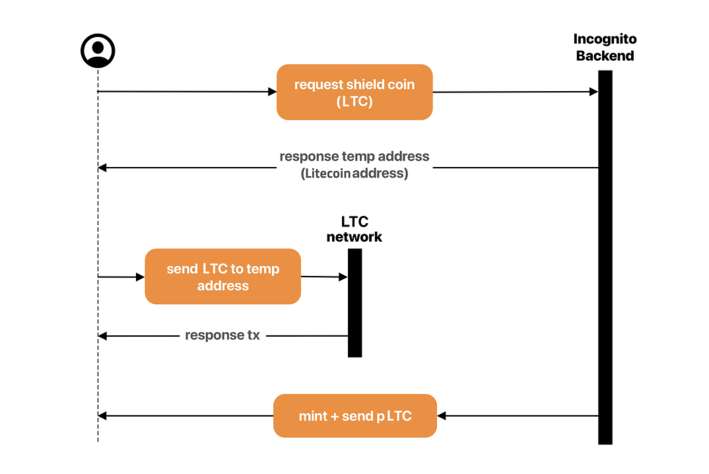 The integration with Incognito corresponds to the original vision of Litecoin’s inventor, Charlie Lee:

I want to make is so that users don’t have to worry about giving up their financial privacy by using Litecoin. Even if you’re not doing anything illegal, you don’t want people to know how much money you have or what your paycheck is.

As reported by CNF, the Litecoin community is looking forward to the deployment of the MimbleWimble protocol. In an update from lead developer, David Burkett, it was stated that MimbleWimble will be released sometime in 2021 bringing more privacy and fungibility to Litecoin.

Bitcoin Is Braced For A Massive Week

Looking ahead in financial services regulation

Investors should keep an eye on the blockchain...

Someone paid $4,480 for an XRP transaction