Nasdaq fractal analyst Coiner-Yadox posted on Twitter stating that the Bitcoin price will continue to rise. In his tweet, he drew attention to the price correlation between Bitcoin and Nasdaq.

In the analysis shared in Bitcoinist, it is stated that the analyst, who made predictions with Nasdaq fractals for the Bitcoin price in previous periods, attracted attention with the analysis he made in 2020. Coiner-Yadox correctly predicted the year-on-year rise and fall in Bitcoin by comparing it with 2008 data from Nasdaq fractals. However, it was shared that some experts also made positive comments for Bitcoin.

The fractals that occur in potential trend changes or major price moves are known as an indicator that makes it easier for the analyst to establish a relationship between Nasdaq and Bitcoin. Coiner-Yadox stated that Bitcoin matched the Nasdaq’s outlook during the 2008 economic crisis. According to the analyst, if Bitcoin follows the Nasdaq’s path after 2008, it could soon reach up to $ 15,000. 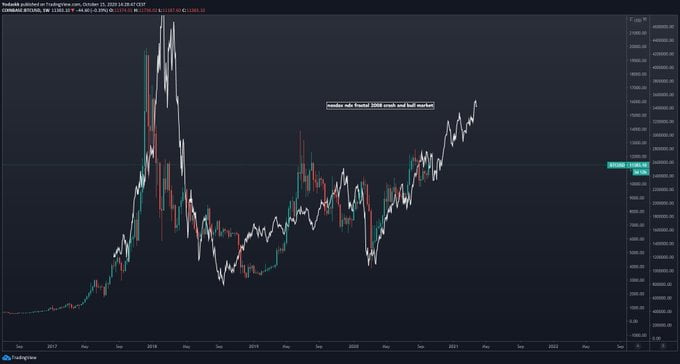 The analyst had previously made predictions on Nasdaq fractals. He predicted that Bitcoin would rise above $ 10,000 after March, and decline to $ 9,800 after August. BTC, which fell sharply to the level of 9,800 from over $ 12,000 in August, proved the accuracy of the analyst’s predictions.

Value of BTC Will Rise

Many analysts recently made statements stating that they believe Bitcoin will rise. Recently, Real Vision CEO Raoul Pal made some statements about the Fed and talked about Bitcoin. Pal said the Federal Reserve will do everything it can to stop deflation, which is a very good sign for gold and Bitcoin. Raoul Pal also made a statement a few days ago, evaluating global macro trends, predicting that Bitcoin will reach $ 1,000,000 in the coming years.

Bitcoin is currently trading at $ 11344.28, according to TradingView data.