The moon is nigh these altcoins

This week started on the right foot with cryptocurrencies posting gains across the board. For instance, Bitcoin climbed towards $12,000 but hit a wall at $11,800. Ethereum extended the bullish action, almost hitting $400, while Ripple tested $0.26 hurdle again.

However, most of these gains were erased on Friday following the news that OKEx has suspended all digital assets/cryptocurrencies withdrawals. The flagship crypto toppled to $11,200, while Ether dropped to $365. Intriguingly, some digital assets like Waves, ABBC Coin and Filecoin closed the week in the green.

After completing the double-bottom pattern on the 4-hour chart, Waves shot up massively. The remarkable price action overcame the resistance at the 50 Simple Moving Average (SMA), the 100 SMA and 200 SMA. Several other hurdles were pushed into the rearview, extending the price action towards $3.4.

At the time of writing, WAVES/USD is trading at $3.0 after a minor retreat while buyers work around the clock to ensure that the uptrend continues. The low trading volume suggests that rapid movements are unlikely in the near term. 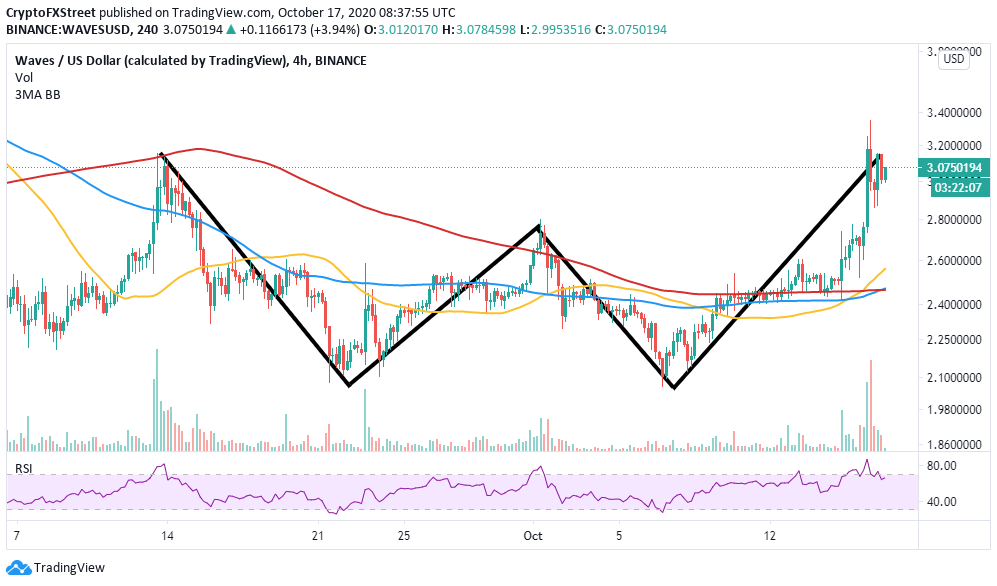 According to Santiment, a spike in social Waves’ social media mentions preceded the extensive bullishness in the last few days. On October 15, social media volume soared to 25, followed by the price action to $3.4.

On the other hand, increased social media mentions are not good signs for the uptrend’s continuation. In most cases, a price pump attracts the masses to the token, but they start dumping, impacting the price negatively.

Following an impressive rally since August, ABBC Coin appears to have hit a crucial resistance at $1.2. The token is trading at $0.63 amid a developing bearish momentum. The Relative Strength Index recently hit levels above 90 but is currently retreating from the overbought area. This overbought condition adds credence to the bearish outlook.

On the flip side, short term support is anticipated at $0.45. Similarly, extended losses will seek refuge at the 50-day SMA. If push comes to shove, the 100 SMA is in line to prevent losses from piercing through $0.20.

Like Waves, a spike in ABBC Coin mentions went ballistic across various social media platforms on October 15. Unfortunately, the craze surrounding the crypto died down shortly after and is currently non-existent. The ongoing price reversal has reflected the decline in social volume.

Following the launch of Filecoin (FIL), the price shot up to $275. However, a reflex correction took place immediately with the price holding onto a newly established support at $40. At the time of writing, FIL is trading at $45 while holding firmly to the 50 SMA. Losses are anticipated if the 50 SMA support is broken.

On the upside, the 100 SMA stands in the way and is likely to delay recovery. The RSI shows that the path of least resistance is downwards for now. Support at $40 will come in handy if declines continue.

Important Facts You Need to Know About Bitcoin Mining

The rise of decentralized finance (DeFi) has been buoyed on trends like non-custodian lending, automated market making, and yield...

After witnessing a brief sell-off period just two days back, the privacy coin Monero regained its bullishness. The presence of...