Bitcoin Thriving In Coronavirus Crisis, Is It All Related?

The price surge is triggering interest

Investor Kevin Cage says that people are starting to pay attention to XRP only now, while they had plenty of time to accumulate XRP before – while it was trading below $0.20.

He reckons that interest to assets rising in price is much higher than to those which are in the lows and so he believes that when XRP hits $1, many will start buying it only then.

Friends & Family hitting me up today to buy $XRP bc they saw it was up a little. Human Psychology, Folks. Nobody wanted to pull the trigger when it was 18 cents

Imagine how many people will hit you up when we actually get moving. They’ll buy at $1#HadTheirChance #XRPCommunity

Technical analysts are also bullish on this coin, although they pay much more attention to Bitcoin and Ethereum. 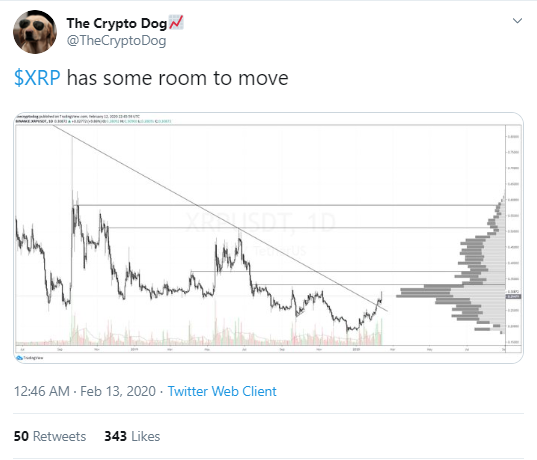 The XRPL Monitor account has shared details of another XRP portion released by Ripple. This time it is 20 mln XRP moved between the company’s wallets.

Ripple owns around half of the total supply and releases small stashes from time to time for investment purposes or other goals. On the first day of each month, the blockchain behemoth unlocks 1 bln XRP from escrow.

This makes many in the XRP community disappointed, since they believe all the XRP released this way eventually finds its way to the market and keeps the price from skyrocketing.

Bankers coin was invented so that once garlichouse dumps the entire treasury on the hodlers, they realize that centralization is evil and their believe in plan₿ manifests itself

Bitcoin Thriving In Coronavirus Crisis, Is It All Related?